The ever popular Cuckoo Clock is common in many households. This clock was traded in by my father and subsequently cleaned by me many years ago. Two generations of children have grown up with this clock and were fascinated with the cuckoo bird popping out on demand (I seldom run the clock, but often make it cuckoo for the children.

This is a one-day wind version. That means the weights need to be pulled up daily to keep it running. 8-day versions are also popular, but the extra weight generally causes severe wear on the clock movements which typically have thinner brass plates than the 8-day wind clocks made in the U.S. in the early years.

Music boxes were a popular add-on to these clocks and they were often tied to additional characters beside the cuckoo birds, or to animated dancers or figures. While those mechanisms are more complex, the results are delightful!

One of my favorite time pieces! 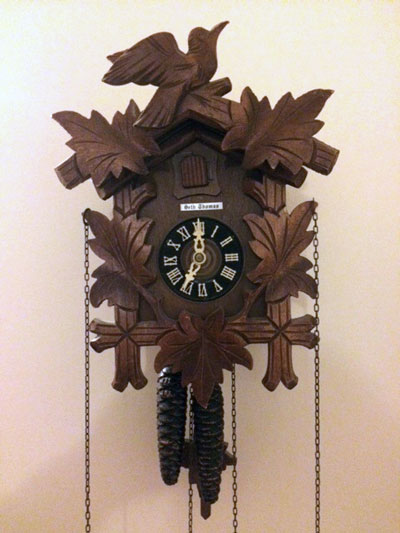